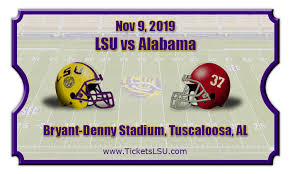 Though not known as one of the top ten rivalries in college football, it may be shaping up to become one as both teams have been in the hunt for the national championship lately. This years meeting takes on special significance as Alabama is ranked #2 and LSU is ranked # 4 at press time. colleges are in the hunt for the College Football Championship and this year’s game is sure to be a thriller.

This year’s contest is being played at Bryant Denny Stadium in Tuscaloosa, Alabama.

“This year’s showdown between Alabama and LSU is bound to be a classic.”