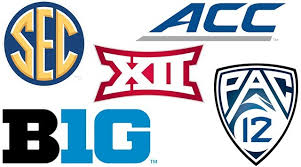 One of the most important weekends in College Football is Championship Weekend, where the FBS (Football Bowl Subdivision) teams determine the champions of their respective conferences.  The College Football Playoff rankings will largely depend upon how the teams fair against their conference rivals and teams either solidify their standings or lose momentum heading to the playoffs. The following are the power five conference championships.