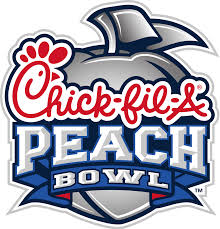 The Chick-fil-A Peach Bowl is an SEC affiliated college bowl game played at the new Mercedes Benz Stadium in Atlanta, Ga. The 2019 edition of the game will be played on December 28 and has been designated one of the College Football Championship semi-finals.  It was first played in 1968, making it 9th oldest post season bowl game.  Since 2014 it has been a part of the College Football Championship and will once again play host to the semi-final game in 20122 and 20125.  Previously, The Peach Bowl was played in the Georgia Dome, where it set a Georgia Dome attendance record of 75,400 in 2006.  It sold out the Georgia Dome for 17 straight years from 1998 to 2013.