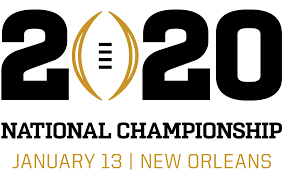 The College Football Playoff National Championship will be played on January 13, 2020 at The Mercedes-Benz Superdome in New Orleans, Louisiana between the winners of the Chick-fil-A Peach Bowl Bowl and The Fiesta Bowl, the designated 2020  semi-final games, both to be played on December 28th, 2019.

The game determines the champion of the  NCAA Division I Football Bowl Subdivision.

For general information on tickets and hospitality: CFP Tickets