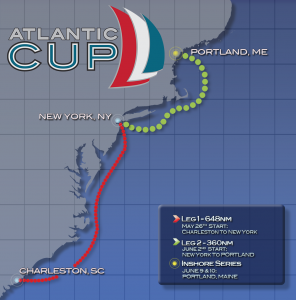 The Atlantic Cup is the United States’ premier and only dedicated Class 40 sailing race. The race showcases some of the top Class 40 sailors in the U.S. and world as they compete in the 3-leg event. The Atlantic Cup challenges the sailors in multiple ways. The two offshore legs will be sailed double handed (two People). The first leg of the race is a long offshore leg covering 640 nautical miles(3+ days). The second leg will be a shorter 360 nautical mile (2+ days) offshore sprint. Both the offshore legs will demand high physical input and provide little rest.  The third leg will force the sailors to switch their boats to an inshore mode and race with a crew of six. The combined overall winner of all 3 legs will be crowned Atlantic Cup Champion.