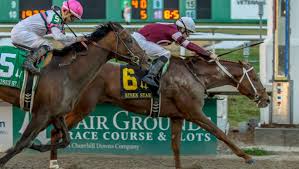 The Risen Star Stakes is an American Thoroughbred horse race run annually in February at the Fair Grounds Race Course. It is open to three-year-old horses and is raced over a distance of one and one-sixteenth miles on the dirt.  It is one of the Derby Prep races that determine eligibility for the Kentucky Derby and is the first race in the series to award a total of 85 points, with 50 points going to the winner! As such it is considered the unofficial start of the horse racing season by VIP Hospitality!

The Risen Star Stakes is a Grade III race and currently offers a purse of $400,000. Run annually in February, usually during the President’s Day weekend.